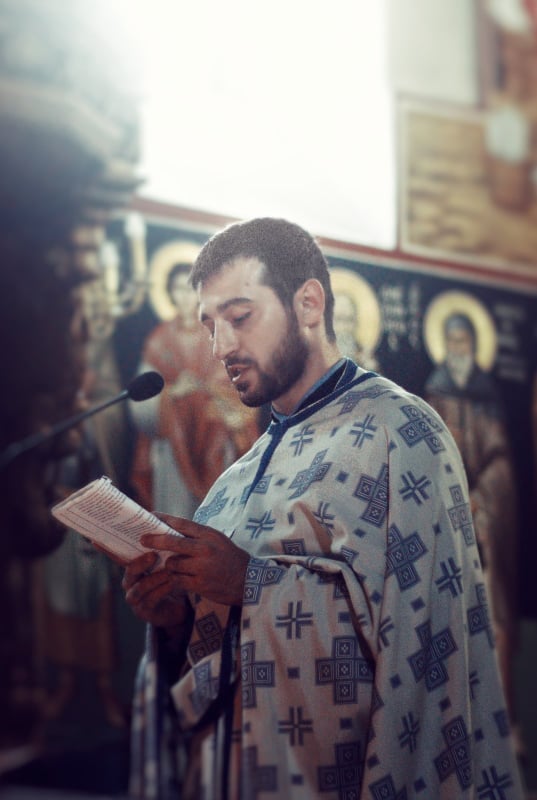 The Hellenic Community of Vancouver and St. George’s Greek Orthodox Cathedral are proud to welcome Father Nikolaos Sideras to serve as our parish priest. He was ordained to the Holy Priesthood as a Deacon in 2014 and was elevated to Presviteros-Priest in 2016. He recently finished his university studies at the Theological School of Aristotle at the University of Thessaloniki.

Joining him in Vancouver are his family: Presbytera Petroula and their three young children Panagiotis, Christoforos, and Akylina.

Father Nikolaos was born in Thessaloniki in September 1987 to Savvas Sideras and Maria Papadimopoulou. He has an older brother George and a younger sister Maria.

As a young child he began training in Taekwondo ITF and continued until age 26 in competitive martial arts. He was undefeated from 2004 to 2013, MVP in 2005 and 2008, winning 8 Pan-European championships and 3 World Championships and was a member of the Greek National Team for 10 consecutive years. Subsequently, he earned a coaching degree and served as coach for the Greek team in 2012 and 2013.

Further studies include two and a half years at the Police Academy (2007 – 2009) and served as a police officer in Thessaloniki.

As an entire community, we warmly welcome Father, Presbytera, and their children to Vancouver. 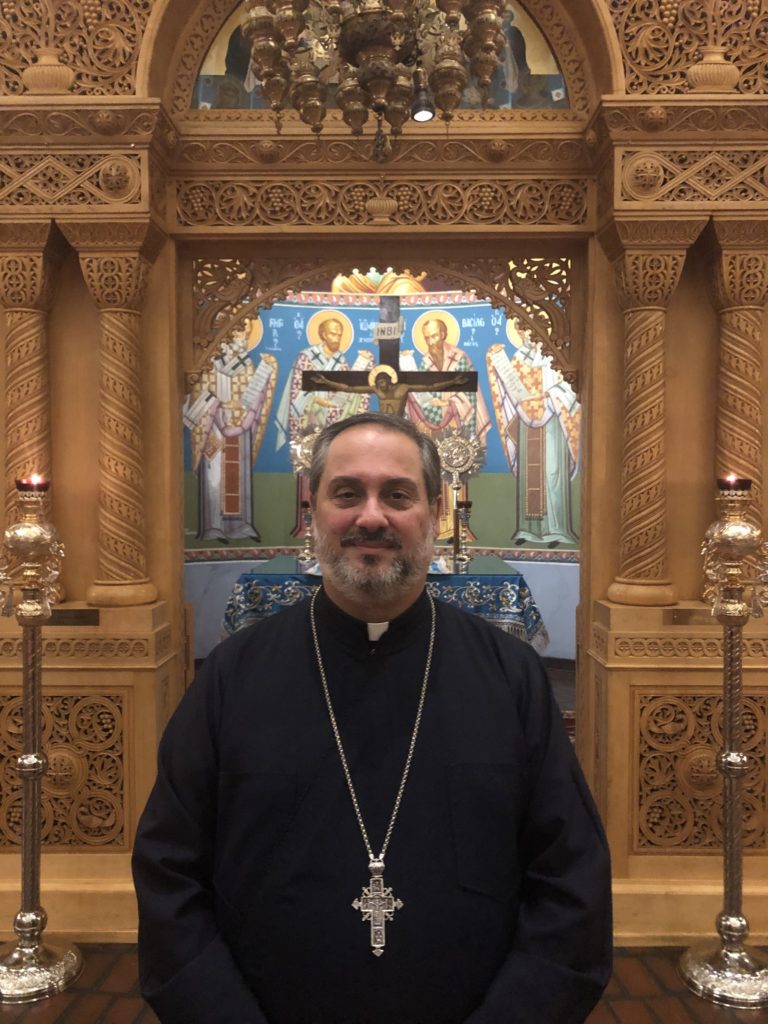 Fr. Odisseys Drossos was born in Montreal, Quebec on September 18, 1967. Following graduation from Malcolm Campbell High School in 1984, he earned a Bachelor of Liberal Arts Degree in Pre-Theology from Hellenic College in Brookline, MA, USA in 1990 and earned a Masters of Divinity from Holy Cross Greek Orthodox School of Theology in Brookline, MA, USA in 1993. During his seven years at Hellenic College/Holy Cross, Fr. Odisseys was a member of the Byzantine Choir, “Romanos o Melodos”. He served as Chanting Leader in the Chapel and Teaching Assistant to the Professor of Byzantine Music. After graduation, Fr. Odisseys served as the Pastoral Assistant at St. Nicholas Greek Orthodox Church in Oak Lawn, IL, USA under the direction of Archimandrite Fr. Gabriel Karambis. While in the Chicago area, he met his wife Maria Kalyvas, and was married on February 5 1995.

He was ordained to the Deaconate on July 17, 1995 at the Annunciation Church in Montreal, Quebec and ordained to the Priesthood on July 18, 1995 at Saints Panteleimon, Anna and Paraskevi Greek Orthodox Church in Markham, Ontario where he served as Parish Priest till August 31, 2019.

On March 7, 2005, His Eminence Metropolitan Sotirios elevated Fr. Odisseys to the O!ce of Oikonomos, (good steward). On July 26, 2017, His Eminence Metropolitan Sotirios elevated Fr. Odisseys to the O!ce of ProtoPresbyter. In addition to his pastoral duties at St. Panteleimon Greek Orthodox Church in Markham, he has served as editor/producer of the weekly Archdiocesan TV program, as well as the Director of Social Services and one of the founding Directors of the Summer Camp Metamorphosis programs for the Greek Orthodox Metropolis (Archdiocese) of Toronto. He also has served as the Professor(Instructor) of Byzantine Music at the Patriarchal Toronto Orthodox Theological Academy as well as the Byzantine School of Music and the Chaplain of the Metamorphosis Greek Orthodox Day School in Toronto. On December 30, 2006, Fr. Odis & Maria became the proud parents of a healthy baby boy: Thomas Tsambikos Drossos. On September 1st, 2019, Father Odisseys has assumed his responsibilities as the priest of St. George Greek Orthodox Cathedral here in Vancouver, BC. 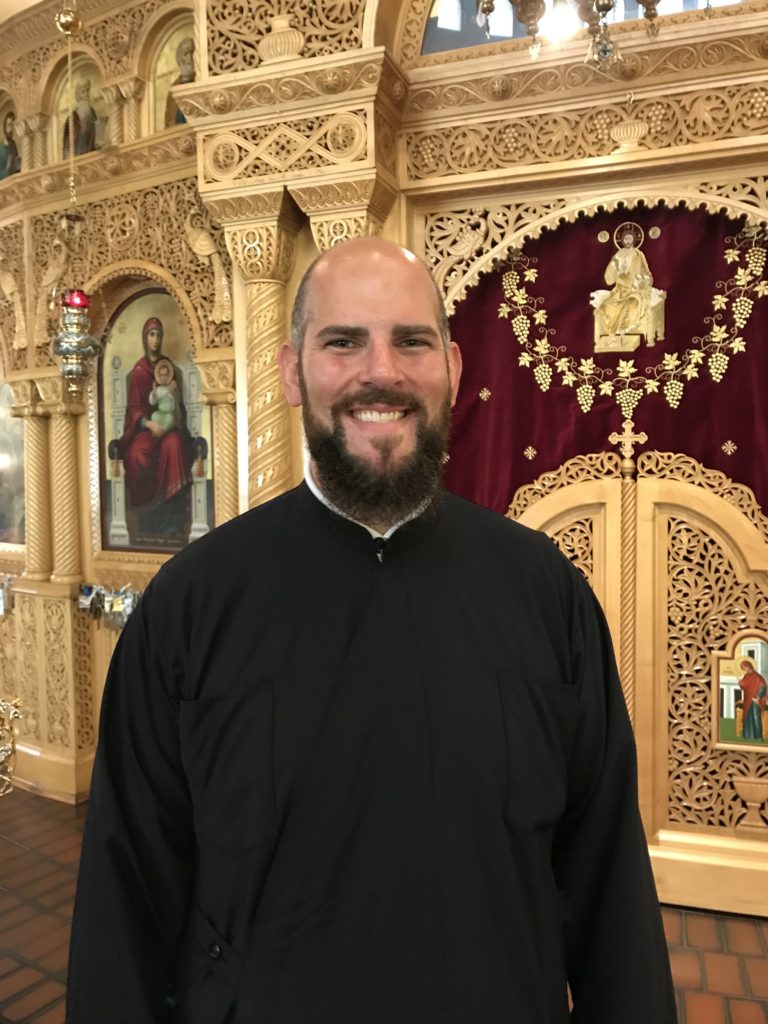 Protopresbyter Reverend Father Demetrios Partsafas, the middle child of Socrates and Maria Partsafas, was born on October 27, 1940 in Kokkari, Samos. Father Demetrios grew up on the island of Samos until 1954 when he left Samos for Montreal with his mother and two siblings to join his father, who had immigrated to Canada in 1951.

As a teenager in Montreal, Fr. Demetrios attended high school at night and worked during daytime to help his family.Young Demetrios served as an altar boy in Sherbrooke and attended St. George’s Greek Orthodox Church on Coté street.
Fr. Demetrios made the decision to enter priesthood in his early 20s and with the assistance and guidance of the Metropolitan Athenagoras of England, he returned to Greece and studied theology at the University of Thessaloniki.  After graduating in 1967, Fr. Demetrios met Irene Hatzioannou, also from Samos. They married in 1968 and in the spring of 1969, the newly-married couple moved back to Montreal.
Upon his return to Canada, the late Bishop Theodosius ordained Fr. Demetrios on July 6, 1969 as deacon at his home parish, St. George’s, and the next day, on July 7, 1969, Fr. Demetrios was ordained as a priest. In late July 1969, Fr.  Demetrios was appointed as parish priest of St. Demetrios Greek Orthodox Church in the small town of Waterloo, Iowa, where he served for the next 5 years.
While in Waterloo, Father Demetrios and Presbytera Irene started their family and they

welcomed into the world their son, Socrates in 1969, followed by their twin daughters Maria and Stella in 1972. Their third child, Nektaria, was born in Vancouver in 1980.

In the spring of 1974, while in Chicago for the Clergy-Laity Conference of the Greek Orthodox Diocese of America, Fr. Demetrios met two representatives from the Hellenic Community of Vancouver, Tom Karras and Georgios Christocostas. During the conference, these two gentlemen approached the newly-appointed Bishop of Canada, His Grace Bishop Sotirios of Toronto (now His Eminence Archbishop Sotirios) to ask if he would consider transferring Fr. Demetrios to Vancouver.
As a result of these discussions at the conference, Fr. Demetrios came to Vancouver in September 1974 to meet with the Board of Trustees. Upon his return to Iowa and by invitation of the Board of Trustees of the Hellenic Community, Fr. Demetrios and his young family arrived in Vancouver on September 22, 1974.
Two years after arriving in Vancouver not only was Fr. Demetrios involved in the fundraising efforts for the church iconography and furniture but became involved with the fundraising efforts for the construction of the Hellenic Community Centre. During his 40 years at St. George’s, Fr. Demetrios continued his work to beautify our church by leading the fundraising efforts for both additional iconography and carpet replacement in 2012.

Fr. Demetrios was a central force in the Hellenic Community of Vancouver for over four decades. Under his direction, countless young men served the altar as altar boys during the Divine Liturgies and other important feast days. He also was responsible in leading a robust Sunday School program with very dedicated volunteers who taught the youngest members of our community about our faith. After completing Sunday School, the youth of our community entered GOYA (Greek Orthodox Youth Association) and Fr. Demetrios ensured that the youth remained close to the church and engaged in their community. Most recently, Fr. Demetrios was involved in supporting Camp Metamorphosis. He was also an advisor to our Greek language program where thousands of students studied our language, culture and religion.

In addition to his extensive work with the youth, Fr. Demetrios had other significant highlights during his tenure including hosting  the World Council of Churches in 1983, welcoming His All Holiness Bartholomew in 1998, and hosting two Clergy-Laity Assemblies of our Holy Metropolis in 1985 and 2013.
Fr. Demetrios was also very active in many programs that brought families closer to the community including the Healthier, Safer, Family and Community initiative in the 1990s and the establishment of a Mother’s Day Walk the proceeds of which were donated to the BC Children’s Hospital. Fr. Demetrios organized numerous visits to the local monastery of St. John the Forerunner in Washington State and led a group to the Holy Land.

During his time at St. George’s, Fr. Demetrios was elevated to the office of Economos and then Protopresbyter by His Eminence Archbishop Sotirios.”

Renew or Become a Member